Today, it's more about going underneath the hood on programming. Looking at principles of programming, it won't feel magical and we will understand how things work.

Some basic code below from last week -

What is main()? It is the main function of the program

printf() is also a function, can take in one input. it is part of stdio library.

stdio is a library, someone elses code. it is a header file in C. It has the prototype of printf().

Above are commands in the terminal. When you compile your program with clang, it creates a.out file with machine code.

clang -o is a command line argument to rename the output file. lcs is to link in the cs50 library. Using the 'make' command simplifies these commands.

Running make or clang commands, there are 4 steps.

During preprocessing, when you run clang (or run make command), the '#' lines (library lines), clang takes the relevant lines from the library and copy and pastes into your code. In the above code, we replaced the #include lines and put the functions which are borrowed from those libraries. 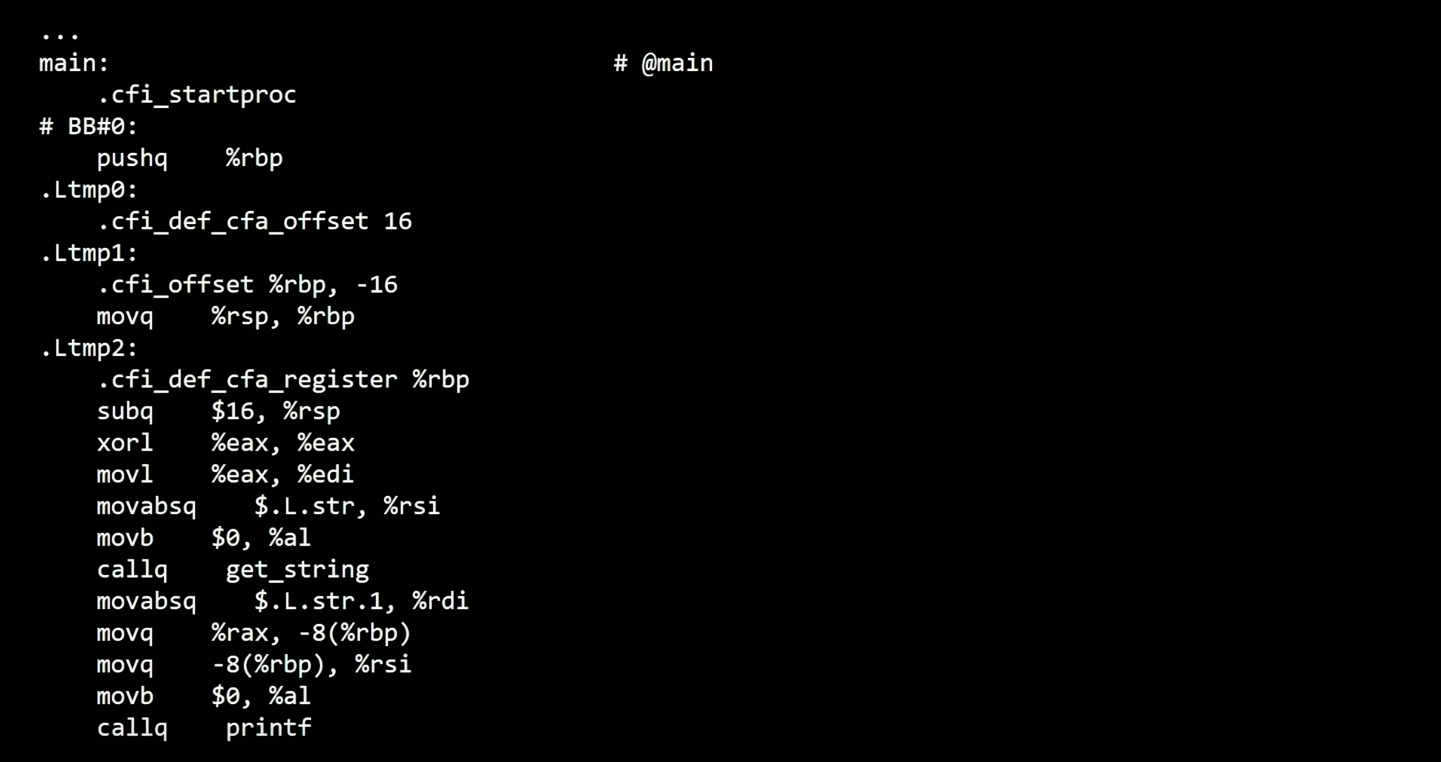 C code changes via clang to assembley code. Some words may look familiar. This is closer to what CPU will understand. There are some instructions for the CPU in here (pushq, movq,subq,)...these are things to move around in memory, etc. Its not for us, clang does this for us.

Another thing clang does. It makes the assembly code 0s and 1s to machine code.

All the machine code (from printf, get string, etc.) links up into one file, a.out.

Bugs are mistakes in programs.

We are now using an IDE instead of the Sandbox from last week. An IDE is an integrated development environment. Essentially, there are a few more tools included in this environment, as opposed to a more basic sandbox. The IDE includes a debugger, which is a very useful tool. A debugger will run your code step by step, see where it goes wrong. There are debugger features in modern browsers (Firefox, Chrome, etc.). You can run through the code step by step, seeing what is changing, local variables (and their values), functions invoked, etc.

If there is a problem with the syntax, most likely the code won't run and you will recieve an error message in the terminal. 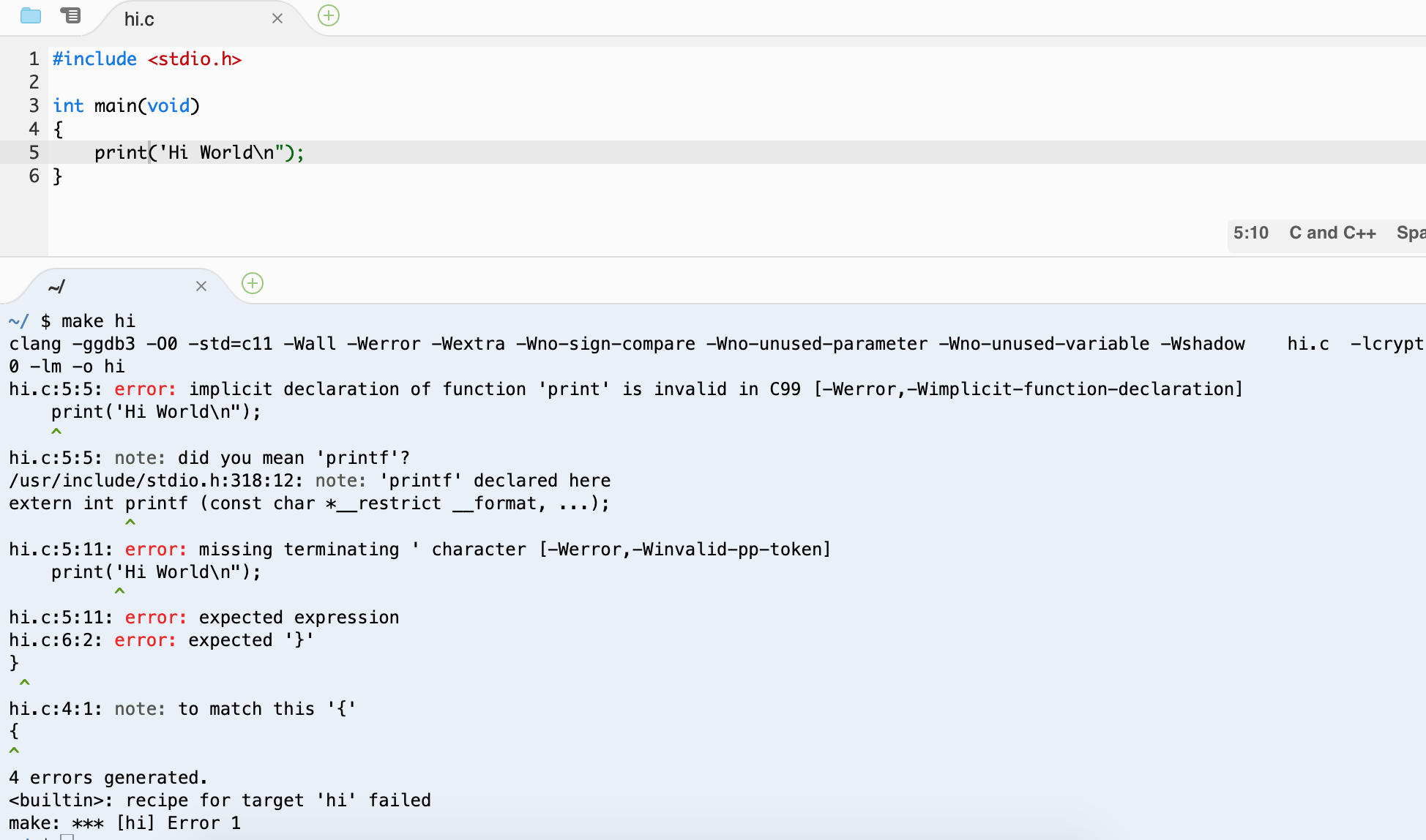 CS50 IDE has a few built in commands which help you debug, instead of having to disect those overwhelming error messages.

(Just prefix your commands with these)

Most programming languages will have 'style guides' -- how to make your code more readable, this is opinionated though.

Besides syntax problems, you may run into logical problems. This is where printf (or console.log in JS) can be very helpful. Program executes w/o errors so you can see at least what is going on.

How else to debug? Taking a break from the code always helps, refreshs the mind.

Rubberduck debugging - talk it out, line by line, explaining what is going on in each line of code. It will help you think, and hopefully catch where the program is faltering.

Subjective...the process of writing well designed software. Not just solve problems, but solve the problem well. When involving data and users, must design programs efficiently as it may take up large resources (memory, time).

Data types take up certain bytes. Computers have RAM (random access memory). RAM is where information is stored while the programs are running. There is a finite number of bytes in RAM...think of each data type, how many bytes they're taking up. 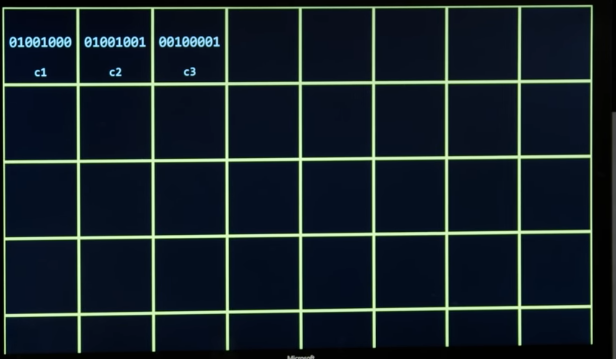 How is the computer storing the information?

Casting: the act of converting one data type to another

Above will print char's numbers, you get the ASCII values of "H I !"

The below program could be designed a little better. If you know you have or will have closely related values, consider using an array.

Could we store scores together?

An array is a list of values, all the same data type, in one variable. We could put all 3 scores in an array. There are a few different ways to initialize an array. Arrays are zero indexed, so start at 0, not 1.

There is a more readable way to write out the array. Code still seems a little verbose. The above code violates the DRY (Don't Repeat Yourself) principle. It can be rewritten more efficiently (we can also make it more dynamic and less hardcoded).

You can use a constant (const) to hardcode a value if you know it won't change (JS has introduced const recently).

Global variables, try to avoid, unless you're going to use a const.

We can make this more dynamic by asking the user for input, then store the input and produce the output (output being the average). We can also use a float for a more fair average (as we've just been using integers). Here is the program, taking in inputs and using a loop.

Back to Memory...and Data Types 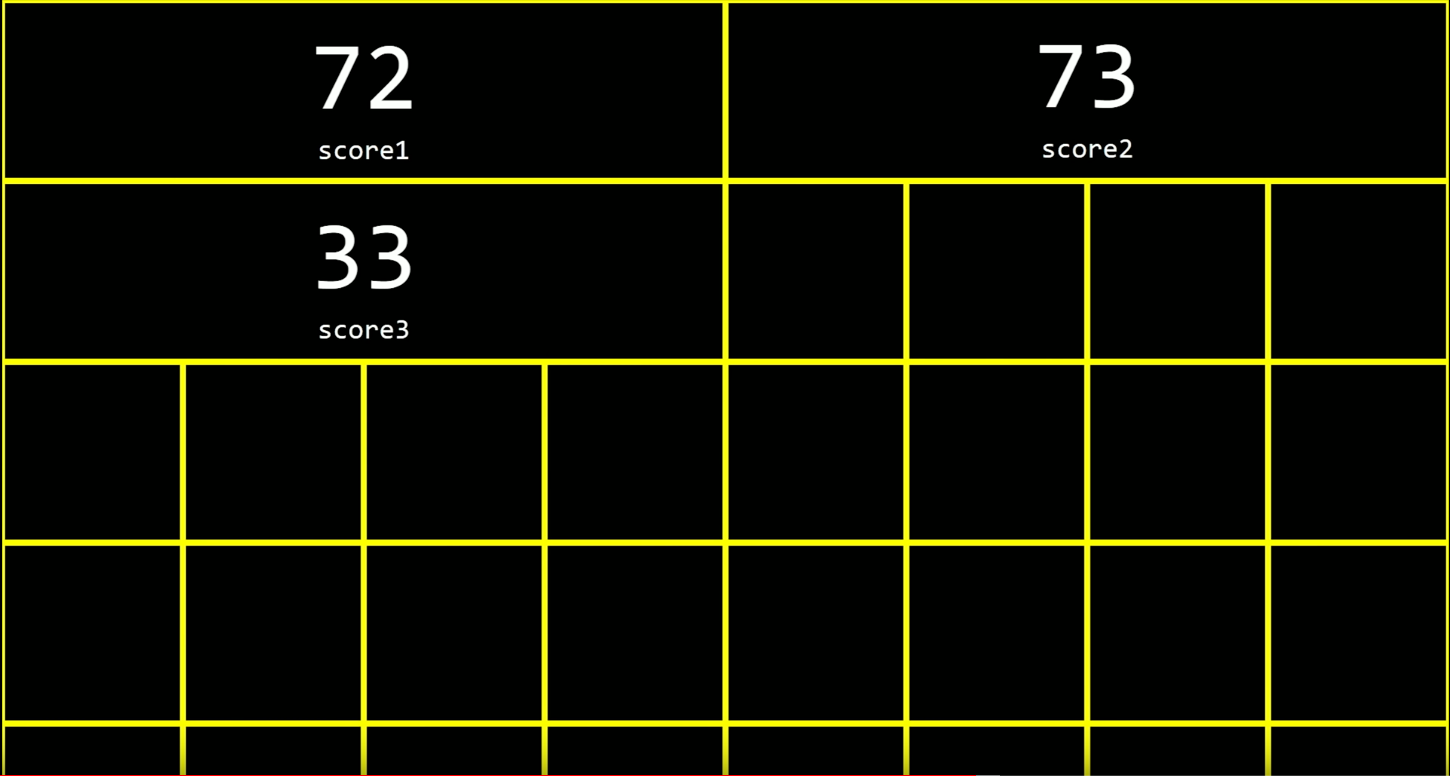 A string is just an array of characters.

Strings can't have a pre-associated length as they vary in bytes.

How do you know when the string ends? There is a null terminating character. It is eight straight 0s to let the computer know the end of the string

String with a length 3 takes up 4 bytes (as seen above). 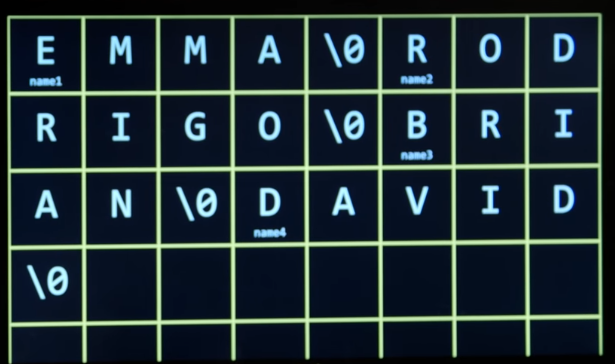 Any character from any string in the array is accessible, using the double bracket notation

Looking more at the standard code we've been using, line by line.

Imports prototypes from other libraries (other functions or helpers that others have written already). So we can use in our code.

The above takes in two arguments. One is an integer, second is an array of strings. To specify, 'argc' is argument count and 'argv' is argument vector. We can implement features like clang has.

If above is named name.c file, we run --

In the second line, there are no arguments provided, so defaults to the else statement.

Why does main have a return value of int? By default, main returns 0. In computers, 0 means all is okay. Main can return non zero values.